No much happening but, the end of an era

So winter 2015-2016 is looking to be a washout. Probably to be expected really, we had 2 years of excellent snow, you can't count on greatness every year.

Obviously I haven't been doing much riding and having 7 sleds around doing nothing seems pretty absurd so last Saturday I finally said goodbye to an old friend, the 1995 Ski-Doo Grand Touring left the yard for the final time. 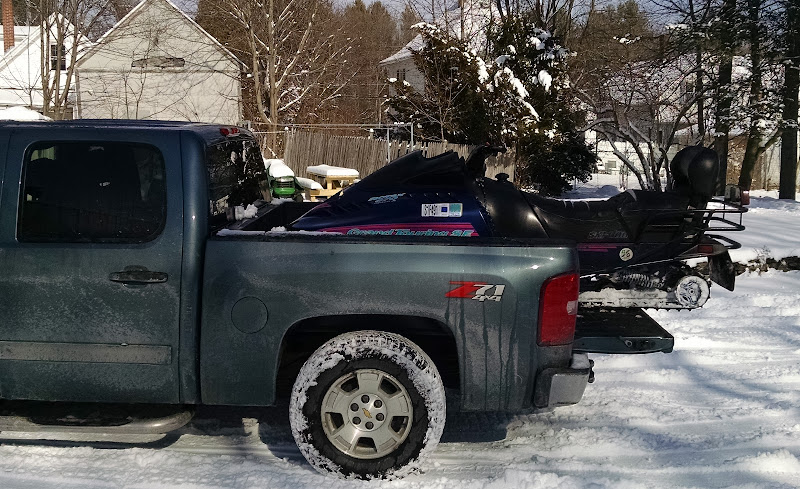 I accepted less money than I'd planned to but I still got better than 2/3 what I paid for the sled 7 years ago so I suppose I didn't come out too badly.

Friday I took the '91 Jag out for a spin, we'd gotten maybe 4" of snow and I just couldn't resist. The trails were rotten, the water holes had a skim of slush on them and were slippery as heck in the bottom, I had to keep hard on the gas to get through. The odo says I went 2.5 miles but I bet it was closer to 2 miles with half a mile of track slip. Still even a bad ride is better than no ride at all.

Finally I got the Wankel Panther going again. I'd gotten kind of disgusted with wrenching last winter and it was a challenge to get going again but I managed it. The change is nothing short of remarkable, the entire time I've owned it that sled was a challenge to run, I could never get it tuned well and it was just never happy. Once I got it back together and dealt with the fact that the gas line in the tank had melted it fired right up and ran pretty much perfectly. I think I could open the low needle just a little more but otherwise she's all set. I was so pleased I made a video:


Eventually I want to make a bunch of these where I show off the machine and take it for a ride, sort of like Jay Leno's garage but for snowmobiles.

Anyway, theres an update, we got another inch or two of snow last night so I reckon I'll get the '98 Jag out today and see what it can do. I've been fighting the carb on that one, it spits and dies. I think I had water in the gas so I finally bought an electric fuel siphon and drained the tank. With fresh gas it runs better but I think I need to go through the carb one more time. This summer I'll put a rubber glove on the gas cap in case its leaking...
Posted by Curt at 11:43 AM No comments: