After the washout that was the 2015-16 season I'm sure hoping for some snow this year. So far its been exciting and disappointing. Early season snow had things looking good and the Wednesday after Christmas I spent the morning putting up signs for the snowmobile club and the afternoon trying to get my old junk to run.
Right before Christmas I'd given it a shot and neither Jag would fire up. The '91 would pop a little but wouldn't stay running, the '98 wouldn't even pop unless I primed it with gas down the sparkplug holes. I figured dirty carbs.
The '98 has a single carb while the '91 has duals so I figured to try the single first. Access is tight but not impossible. The bowl had a soup of water and gas which was almost certainly the issue and although I did have to prime the engine with a shot of gas down the sparkplug holes it fired up and ran good. Its still got a weird bog but I *think* that might be because of how much sitting its done.

I ran out of light so the '91 waited until the next day. I pulled the carbs and found the filthiest bores I've ever seen... 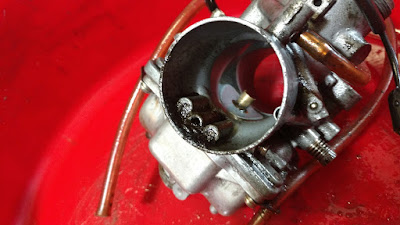 See the schmoo down at the bottom of the bore? There should be a hole there, the carb on the left was totally plugged I ended up soaking it with carb cleaner and running a welding torch cleaning rod through it until I could get it to come out clean. 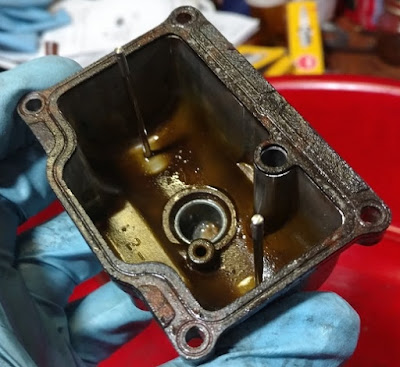 So knowing that the carbs were nasty I knew I'd need to do something about where the goo was coming from. I couldn't actually see anything in the airbox but I knew there had to be something in there. To remove the airbox the gas tank absolutely has to come out, then the steering column has to be loose. To get the gas tank out the seat has to come off leaving me with this: 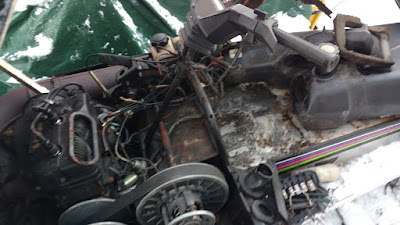 Well that escalated quickly huh? I just wanted to clean the carbs and now...
While pulling the tank out of the way I realized the bottom of the filler neck was cracked. I wonder if this is why I was getting terrible gas mileage a couple winters ago.

So I got the airbox apart and evicted the mouse nest, and got it back together without breaking the old hardened plastic too badly. Then I ran some ThreeBond around the crack on the gas tank. 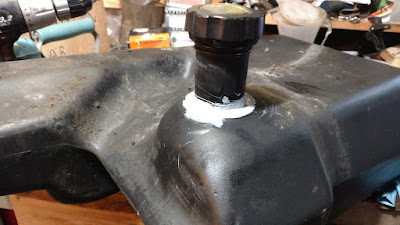 Threebond probably isn't the best stuff for fixing the crack but I cleaned the plastic good before I tried it and it seems to be holding well. The Threebond stays flexible and its strong against gasoline, we'll see how it lasts.

Finally probably the worst part of it all is that the seat wood is ruined and completely came apart. I'm kind of glad I found this now rather than bombing down the trail but I wish it hadn't happened at all. In retrospect the problem is I park my sleds pointed down hill which allows collected water to run under the seat rather than just running out. 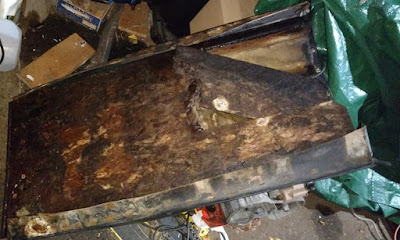 A trip to the hardware store got a quarter sheet of 3/8" ACX plywood. The original stuff appeared to be 3/8" OSB but in retrospect (since the plastic trim doesn't fit) is probably 1/4" 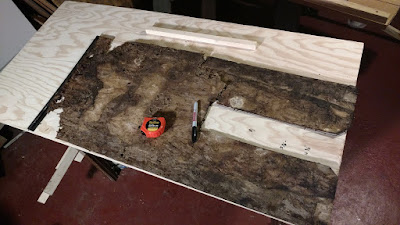 The cut along the front is pretty important, it fits around the gas tank mount to hold the front of the seat down.

So I've got the seat base cut out and ready to go, the last step is to staple the base onto the seat and reinstall.

Meanwhile I got the carbs all cleaned and reinstalled and the sled fires up and runs nice.

Finally I wanted to at least try to prevent this from happening again or maybe mitigate the problem some. I got there by taping some hardware cloth over the opening to the airbox: 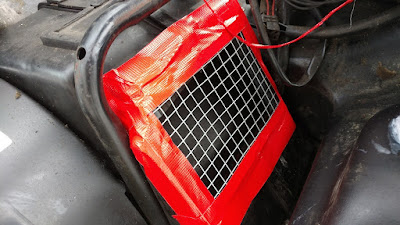 Thats quarter inch hardware cloth which is probably too big but its what I had. I usually use a couple yogurt cups of mothballs in the footwells. This spring I'll add more mothballs to the cup and I'll maybe add another cup under the hood.
Posted by Curt at 3:43 PM No comments: