I went back and fixed almost 3 years of pictures, did you realize the blog is now almost 10 years old? I didn't...

Anyway something new and really the answer to why I haven't done much snowmobile stuff. You might remember back in 2015 when I was "Working with the Groomers" well last January Ben gave me a call "Can you get that ASV to start?" what a loaded question, remember I'd been in the ASV once, 2 years before. I gave him a "maybe" and headed over. 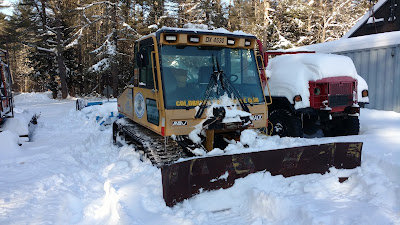 We'd had some good snow and of course somebody had decided to replace the batteries in the machine but hadn't installed them. I plugged in the block heater and got to work on the batteries.

Actually before I talk about the batteries let me mention the block heater. I'd been told a couple times it didn't work but I'm one of those "well let me try it" kind of guys. One thing I noticed is that the outlet we were using was GFI protected so I made sure it was set to on using my heat gun. Then after I plugged in the heater I wondered "How will I know if its working?" A couple years ago I'd tested it with a Kill-A-Watt meter but I seem to have lost that. On this day I used my infrared thermometer. 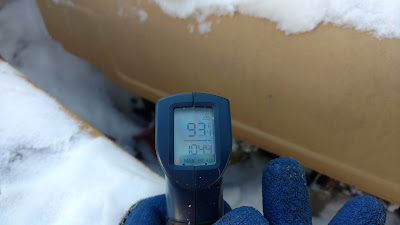 It was 6F outside, I figured if the block heater was 93F it had to be working. These days I just touch it, when its warm to the touch I know its good.

It is of course way more fun (sarcasm!) to repair something you didn't take apart so it took me considerable time to get the batteries in 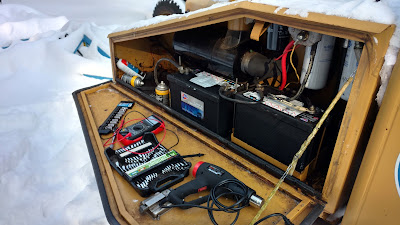 You can see my heat gun in the foreground, that was the next step, I stuck it in air cleaner and waited until that was good and hot. It was really cold out and Ben was scared that I'd ruin the brand new batteries so I wanted to be sure this thing was going to start. A few minutes later I texted Ben 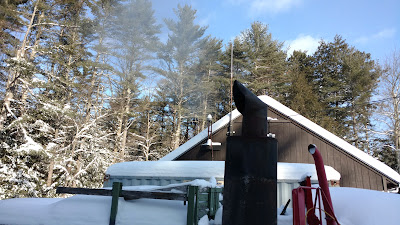 And thats the story of how I became a groomer operator. It really how my life has generally worked, I'm usually the guy at the place that can do the thing. In this case my experience with driving (and starting) old Mercedes diesels was exactly what was required. The engine in the ASV isn't anything like an old Mercedes but the principle is the same and I knew I needed to get it warm to get it to start...

Anyway I don't want this to become a groomer blog but its closer to snowmobiles than anything else I've been doing and I don't want the blog to die from lack of content. Hopefully I'll find time to get the sleds out this year, in the meantime I hope this is good enough.
Posted by Curt at 7:59 PM