Not strictly vintage but I took my '94 Ski-Doo Grand Touring for its inaugural run tonight. We had a good 14" of powder over the weekend and then a deep freeze so I was hoping it would have packed down some.
Some is the operative word, its still way too fluffy to ride for real but somebody else had been down the trail before me so I gave it a shot.

The Grand Touring really soaks up the bumps in a way I'm not used to at all. Stuff that was a real kidney pounding on the TX-L or Tigre (and absolutely brutal on the Olympique) is just bumpy on this, theres miles of suspension. Its also got tons of power. I've never had it over half throttle, don't know what I'd need that for.

At one point I hit a water hole which hadn't frozen solid (of course the GT weighs a million pounds) under the snow and thought I'd had it, I gave it some throttle and we made it through. I'd gone slower into the hole than I'd have normally because of a tree leaning across it. We had an ice storm a week ago and many trees are down or leaning badly.

Finally I had to turn back because the GT is too tall to get under a big tree down across the trail. I'd been under that same tree several times last year with the Tigre, TX-L and Olympique. I know theres a path around it but I couldn't see it in the dark. The reverse gear on the GT was super handy, I'm not sure I could have handled humping that sled around...

On the way back I carried some more speed into the water hole and had less of an issue, I probably should have given more throttle when I hit the water though.

No real issues to report, this is the first time I've gotten the sled all the way warm. The temp gauge got to just above level, theres no numbers but it was maybe 3/4 of the way through its swing. I'm not sure if thats normal or not. At some point soon I'll drain and replace the coolant... 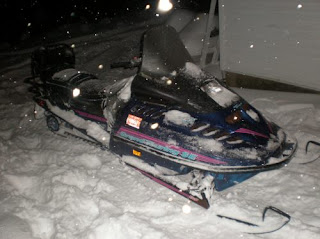 First impression is that its a MONSTER. I brought it home on the trailer because I couldn't imagine hauling it back out of the pickup. It DOMINATES my trailer. I'm reasonably sure even with my extensions (assuming I make a second one) that I can't carry this sled and the Tigre at the same time.
Its got electric start which is VITAL its dammed near impossible to start without it, it'll rip your arm clean off, but you wanna hear about power? This is a fasssst sled even if it does weigh a million pounds. I only had it up to about 40mph because with the way the snow is still coming down I couldn't see anything but this is easily an 85mph sled, maybe 100 but as I say its heavy...

So you don't think I've completely gone to the dark side I did have the Tigre out and buzzing around the yard yesterday. Much more fun to throw that around our little back yard than the GT. If I'd had more mix gas I'd have run it some today. We're going to Maine on Thursday, will probably take the Tigre with us.
Posted by Curt at 6:29 PM No comments: