Bustin out the busted up Ski-Doo

Last winter when I went on the full tank ride Allen pointed out I had a bent trailing arm. My '95 Ski-Doo Grand Touring uses trailing arms for the front suspension which is an old school method. Today everything uses A arms which are lighter and stronger. The original trailing arms on the sled got bent up after an unfortunate encounter with a big concrete block at a gate on our local trail system. I'd had them replaced with aftermarket models which everybody told me weren't as strong as the originals. I guess thats true since I'm really not sure how it got bent this time. These replacement trailing arms are two pieces of stamped metal welded together and when the bend it makes a kink:

I'd already pounded it straight before I took the picture but with the kink there was no way it was going to be strong enough to last, the first good bump I hit with it the kink would bend again and maybe break. I don't want to waste any more money on replacement trailing arms so I figured I'd splint the kink with some angle iron which should be stronger than the original.

Here I've welded on two pieces of 1"x1/8" angle iron. This is the backside of the kink which was worse than the front. I think I must have hit a stump or something and just glanced off of it.

The front side I plated, you can see the dent here where I've left the paint on.

And the finished product:

This should be much stronger than the original, the replacement trailing arms are maybe 1/16" thick, the replacement metal on the back, top and bottom is twice as thick, the plate on the front is the same as the original. It'll be interesting to see if this fix lasts or if I end up remaking the whole trailing arm. If it comes to that I'll get some square stock the same size as the thin end of the trailing arm, run that the whole length and then run a stiffening bar underneath.

After I reinstalled the trailing arm I checked the alignment, for proper steering the skis need to toe out just a bit, if they don't the sled will dart all over, this is a lesson I learned the hard way last winter.

No snow yet but the Ski-Doo is one step closer to being ready. Next up is to repair the exhaust. I've welded on it some before but never really put much time into it. Tomorrow I'll give it a good going over.

Tonight I reassembled one of the crank seal holders with a new seal and o-ring. I need to check in with the Vintagesled boys and see if I should put some goop on the o-ring, my first instinct is no but its good to check.

Then since it'll be a couple weeks until I get a new clutch I turned my attention to the brakes. The brakes on this sled have really never worked, I'd adjusted them six million different ways to no avail, they either didn't work or they stuck on. I finally ordered new pucks and when I compared the old to the new I found that the stationary puck is pretty much the same but the old moving puck is less than half the thickness of the new one. 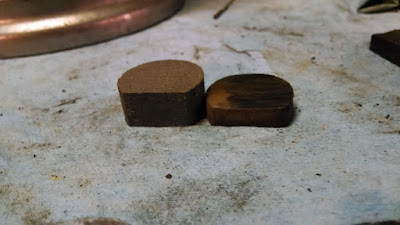 I can also see where the brake caliper was rubbing on the rotor from over adjustment. 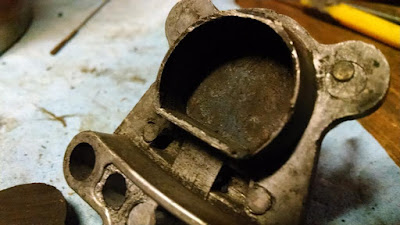 I had to spend some time cleaning up where the edge of the caliper had been ground into the opening for the puck so the new puck would fit.

Finally got some inspiration and decided to get after that Wankel Panther. I grabbed the impact gun and pulled the bolt from the clutch, the outer sheave of which fell off. I was left with this:

Heres the other side:

Whoops! That probably explains why occasionally the sled felt like a freight train on takeoff. It might also explain why I had such a hard time tuning the thing properly, although bad crank seals might have caused that also.

Anyway I made a post on Vintagesleds.com and got a kind offer to help me out, if I send him whats left of the clutch he'll combine it with his half and send me back a working clutch.

With that part worked out I got back to the remaining piece. I hooked the big puller onto it and ripped it to pieces before it finally came off:

Heres the engine with the clutch off:

That big counter weight smooths out the odd shape of the rotor, if you look directly behind it you can see where the seal has been leaking. I'd guess this side has been leaking longer than the other.

The seal carrier has an o-ring around it, that o-ring and the seal were both in terrible shape, its surprising the sled ran at all. Again I have high hopes that the engine will run much better with new seals.

Anyway, next step, put the new seal it, get the clutch shipped out, then on to the mag side!

CDI is in, the season begins!

I got home from work today and the CDI for the Jag had arrived. I'd about given up hope and the place I'd bought it from didn't help by sending me a shipping notification or tracking number.

Its super easy to install, there are 3 plugs and 2 bolts. Here in place:

After that the sled started on the third pull. That was after priming it with maybe 60 pulls a couple weeks ago before I'd realized the CDI was missing. It even idled well which I think means it wants a bunch of Seafoam gas additive. Last year when I first got it it was hard to get it to idle well cold, once it warmed up it was fine though.

After that I put the windshield back on. I'd ordered some new screws and nuts and covers since I'd busted a couple last year.

They're actually a kind of cool system, the tubes on the left have nuts at the bottom, you put the screw in and tighten and it draws the nut up in the rubber which keeps it from coming loose. I shot a little cable lube on each screw as I put it in so I can get them out again in the spring. I also glued the rubber thing into place with a little form-a-gasket which will hopefully help them not turn in the hole while drawing up the rubber, seemed to work but we'll see. I took the windshield off since I don't have garage space for the machine and don't want the windshield ruined by the tarp pulling on it. I built a foam brace for the windshield on the Cobra, we'll see if that worked out. The Pantera and Wankel Panther both have windshields bent back from the pressure of the tarp.
There were a few screws I couldn't get into the nuts because some water had gotten in and frozen. Those were the ones on the front around the headlight. The tarp had come loose and we'd gotten a little rain. I put another bungee on the tarp so hopefully it won't come loose again.

Anyway I'm super excited, I got a couple of rips around the yard and it ran well so I feel confident it'll be good. Now all we need is snow.
Posted by Curt at 7:30 PM No comments:

Speaking of the Pantera I never did talk about the new clutch pucks. This is a Comet Duster 94 clutch, its an aftermarket clutch pretty common to these older sleds. Its actually not supposed to be a good match to my Pantera, its not really supposed to be used on sleds of more than about 40HP, the Pantera's engine is closer to 50HP but this clutch has been on it since my friend Ed bought the sled back in 2001 and everybody has always been happy with the clutch engagement so I figure even if I have to fart around with it every 13 years thats acceptable.

Here's the object in question:

The black one was taken from my sled, the white is a replacement. Notice the scar on the black one, I think thats from the time the sled was frozen to the ground and I tried to break it free with the engine. The way the clutch works is these pucks normally at the bottom of an incline plane. When the engine is revved up centrifugal force tries to force the outward up the slope. The clutch cover resists that since its bolted to the end of the crank. This forces the inclined plane in toward the engine, this causes the outer sheave of the clutch to grab the belt transferring rotational force from the engine to the belt and then onward to the secondary clutch and finally the track. The scar is from the side of the track the puck rides in.

On the scale this one is 23.3g which was essentially what they all were. New pucks are sold by weight with nothing around 23g. The next closest was 25g so thats what I ordered.

All the replacements come in around 25.4g which could just be variation attributable to my scale.

The problem I was fighting was a clutch which wouldn't disengage. I hope thats caused by the pucks not sliding back down the incline due to the scar. Just in case I also bought another stock size spring. Its possible that the old spring has lost some of its sproing and the replacement will do better.

This '78 Pantera is one of the best riding leaf spring sleds I've ever been on so I hope this fixes it. If it doesn't I do have one more trick. Randy scratched up and possibly bent the clutch cover getting it off without the proper puller. The clutch performance actually got worse after that debacle so if the new pucks and spring don't work out I'll get a nother cover and see if that helps.
Posted by Curt at 4:36 PM No comments:

The snow is here!

I wanted you to see that the predicted snow actually did arrive. We got around 8" of heavy wet stuff. No riding for me, what with Thanksgiving and going to my parent's and then a work trip to Washington D.C. there hasn't been time. I promise that when I get home I'll see about firing up the Cobra. Hopefully the new CDI for the Jag will arrive and I'm also equally hopeful that the new clutch weights will make the Pantera clutch work right again.
Posted by Curt at 4:18 PM No comments: