Well, its not a dead sled but groomers are not without troubles.

Early on last season Ben had trouble with the Pisten Bully, none of the hydraulics at the front of the machine would cooperate. He couldn't lift the blade or manipulate it in any way. A little investigation revealed water in the hydraulic oil. After running the engine for half an hour or so the fluid would warm up enough so the water would go liquid and everything would work until the next time. This, of course, was a big issue. We swapped the fluid (its actually Automatic Transmission fluid, ATF) from the reservoir but the lines and pistons still had significant water. It was looking to be expensive (and a lot of work) to swap all the fluid when I hit upon an idea, could we boil the fluid to drive the water out? Thus began the saga of the weirdest thing I'd ever done with a Coleman stove:


In the post script we actually pulled and replaced the fluid 3 or 4 times, we'd draw the fluid out, boil off the water, let it cool, put it back in the machine and let it cycle for awhile and then repeat. Actually to be 100% honest we had 2 sets of fluid so I could be boiling off water while another batch was picking up water. This seems to have cured the issue, we also pulled the filter out of the fluid and actually submerged it in boiling fluid to get the water out of it, I think that helped a lot, I suspect water had gotten trapped in the filter and was being slowly released back into the dried fluid.

Chris and Harold, meanwhile, had both had trouble with tracks on the Northern and Southern Tuckers. I guess I haven't mentioned the Tuckers. When most people think "Snow-Cat" they're thinking of a "Tucker Sno-Cat". The club owns two, here's a terrible picture of the Northern Tucker. 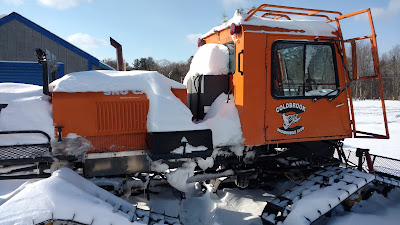 I've heard a Tucker called "Farm equipment with delusions of grandeur. As near as I can tell its a 1 ton, rear engine pickup with tracks. They make several variations for personnel carriers but ours is the common type, its bigger than my ASV but smaller than the Pisten Bully. Power comes from a Cummins 4BT, the drivetrain is an automatic transmission with essentially 2 rear axles, the front axle pivots to steer.
I don't have much experience with them but so far the weak point seems to be the tracks, we replace/repair a lot of tracks on our Tuckers, like 2-3 a year.

Anyway with Ben, Chris and Harold all having troubles I was pretty pleased to get to the end of the season having zero breakdowns and feeling pretty smug, sadly that smile would get wiped off my face all too soon.
Posted by Curt at 7:16 PM