Ahh dear readers you must think I've abandoned you. Well maybe I had but here's some dead sled wrenching content.

The first big snow of 2021 is here so Saturday and Sunday I took some time to get things going.

I started with the two Arctic Cat Jags. Last year I had the '98 going although we never had any snow so I figured I'd start with the '91 this year. It was wicked cold when I dropped them off the trailer and I was disappointed when the '91 wouldn't crank at all. I stuck an electric heater under the hood and shifted my attention to the '98. It was simple enough to pull the plugs, squirt some gas down the plug holes and I was shocked when it fired up and ran on the very first pull. I did have to reprime before it would stay running on fuel from the tank and then the track really didn't want to spin but we got 'er going with relatively little fuss.

With that little accomplishment I moved to the '91, the recoil still wouldn't make the engine turn so I grabbed the clutch and broke it free with little trouble. I've seen this before where a little condensation gets into the jug and since it was so cold that ice held it a little. With the engine free I yanked the rope and, it stayed out... Blarg, a little Kroil fixed that and I shot a little more into the engine to lube it up. A little gas down the plug holes and this one also fired right up. I gotta say I love how the wedge Jag's go, they're lighter and snappier than the newer machines. I suspect the dual carbs on this one help too. 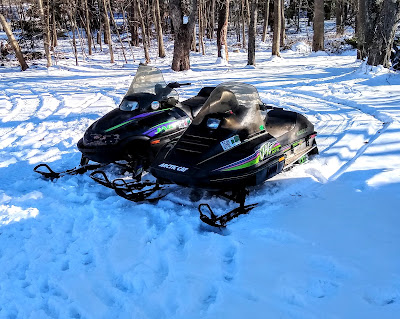 Flushed with success I moved on to the '79 Polaris Cobra. I haven't run this machine for several years, in fact I see my last post was working on that machine and it was very nearly 2 years ago. At that time it had no spark and I failed to fix that. 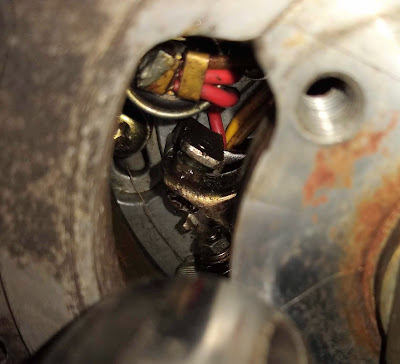 Well here is one of the culprits, this is the rear set of points. I don't remember which cylinder they're for, it doesn't really matter, they were both dirty. It was hard to get a picture but you can see how they're kind of greasy, what you can't see is that they were also kind of green. I tried my usual trick, Deoxit and a business card. While I could get the business card to come out dirty it didn't seem like things were really improving so I resorted to a file. Harbor Freight sells a nifty little file set that isn't marketed toward filing points but they're the right size and shape. I scraped on 'em a little bit, then sprayed off the residue with cheap contact cleaner, then repeated with Deoxit. Then got frustrated and quit for the day. Actually I shouldn't have been frustrated, we went from absolutely no spark to a little blip. It might not seem like much but thats improvement.
So yesterday I went back out, filed more, cleaned more, etc. The frustrating thing is that the recoil and inner cup have to come off to get to the points so you have to put it all back together to test it. Anyway after two more cycles I put it back together and YOWSA we've got spark!
At some point Saturday I did have the forethought to take the airbox off and have a look inside. 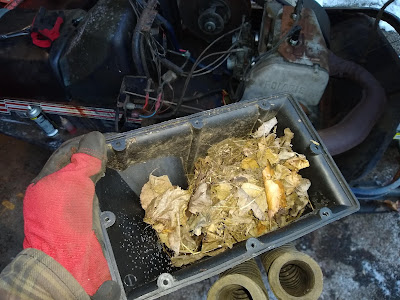 Mr. and Mrs Mouse got evicted...
The nice thing about having the airbox off was to make it easy to shoot gas into the carbs. And thats where we got stuck again, it would pop on premix but wouldn't stay running. So I pulled each carb out of its boot, flipped it over, popped off the bowl and cleaned it and the jets. I also make sure the needles were moving. Surprisingly nothing looked too bad, a little schmoo in the bowl maybe but nothing to write home about.
Put it all back together and it STILL wouldn't run, I mean it'd run for a second on premix but wouldn't stay running. I figured it needed more gas so I got a couple fresh gallons mixed up and, well blarg...
Finally in desperation I took the torch and heated each plug until it glowed red, stabbed 'em in, shot in gas one more time and sonofagun she took right off. This machine has always idled high and it still does. Maybe when we get some snow and I can run it some more I'll try to adjust it, I do have a carb synchronizer I've never used... 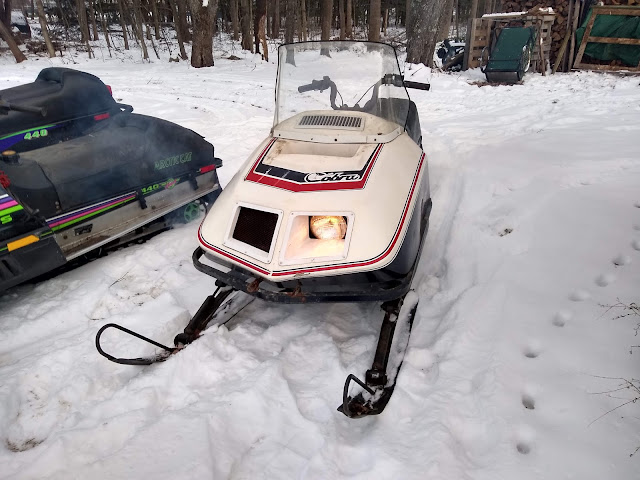 So everybody is running and moving, I really like riding the Polaris, its light and geared low so its quick off the line although it runs out of snort pretty quick. The brake isn't working but thats just the fluid leaking out after sitting a couple years. I'll top it up and it should come right back.
If you've always wanted a Polaris Cobra (or one of the Jags) let me know, you could have this one. Its been a fun sled but I'm ready to play with something else for awhile. I'm open to trades even...
Posted by Curt at 4:29 PM