The Tigre appears to be okay, last night it fired up on the second pull and ran fine, weird...
I decided I'd pull the carbs and replace the flanges, one looked pretty bad and I didn't want the engine sucking air.
For kicks while the carbs were off I did a compression test. 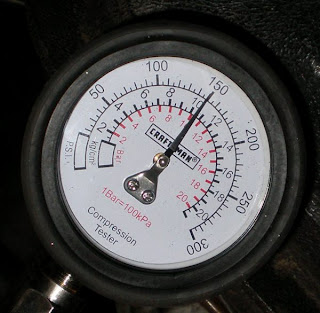 150# is pretty much like a new engine. I'm pretty pleased with it. 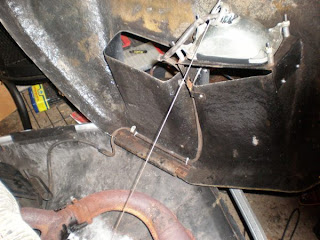 After I got done with the carb flanges I put the new headlight lens in. Its interesting, the glass of the lens doesn't seem to be held in by anything other than the pressure of the metal frame to a plastic material bonded to the glass. On the new lens I glued the plastic to the metal with flexible gasket cement, I also wrapped some electrical tape around the edge on two sides. I dunno if either will make any amount of difference but its worth a try.
You can also see in the picture I've routed the wiring to the headlight differently to keep it from leaning on the pipe. I managed to use one mounting bracket that came with the wiring from the Jag I got it from. I also used two zip ties to the hinge.

I put a new hood wire on last weekend, you can see it in the picture. It came from a '90s Cougar and is too long so it loops around the engine bay. I wanted to use it because its got nice loops but I need to do something else. I bought some cable last week, tomorrow I'll try making something shorter.
Posted by Curt at 8:29 PM